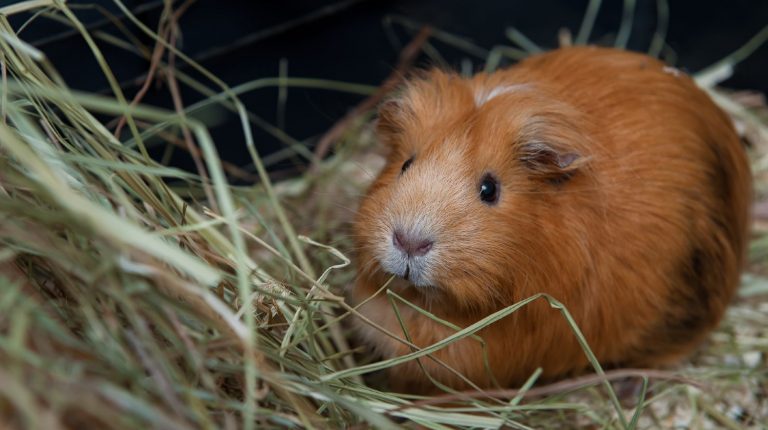 Hay is your guinea pig’s super food and one of their bare essentials. They munch on hay all day every day, and for multiple good reasons: it helps maintain digestion and prevents gut stasis, but as if it wasn’t enough, hay also keeps their teeth from overgrowing.

In other words: hay should be available all the time, either as a big pile or scattered all over the bottom of their cage. It’s not uncommon for guinea pigs to eat 10-20 times a day or more, and this is actually really important for them. Their teeth are constantly growing, and their intestines need to have something to work with at any time of the day.

We’ve tried multiple types of hay through the time, and we’ve found that some just work better than others.

In this guide you’ll also get some pointers on how to assess the quality of your hay, and to understand how and when hay goes bad.

How to get the best hay for your guinea pigs

Most of the hay you can get from local stores is of a decent quality, but there are a few things worth looking for when you’re in the market for a new bag of hay:

The best types of hay

Here are some of the best types of hay, that are popular and easy to get from local stores and online:

Timothy hay is popular and favored for its high fiber contents, and at the same time it’s also low in calories and fat, with a moderate protein content.

This type of hay is widely popular, and easy to buy in bulk from either Amazon or local markets. It is made from timothy grass, and often mixed with other types of hay in bags sold from pet stores. Lots of stores sell pure timothy hay as well, and it’s usually visibly labelled as such.

Meadow hay has a softer texture overall, and some contain edible plants as well, including dandelions, daisies, cornflowers, and thistles.

It mainly consists of native pasture grasses, and as such it isn’t a specific type of hay. You can often find this type of hay in large bales from local farms, since it’s used as a staple for all sorts of animals.

If you want to get this type of hay from a local farm, make sure it’s purposed for horses rather than cattle, as there’s a difference in the quality and texture.

Orchard hay isn’t a common sight in most stores, but happens to appear from time to time. It is quite similar to timothy hay, but slightly lower in calcium and higher in protein.

Texture-wise the orchard hay is softer and finer than timothy hay, and some guinea pigs prefer this over the stalky bits in timothy hay.

Bermuda hay is high in fibers, but not widely available in most countries. In some countries you may be able to find this type of hay, and if you do, it’s a great buy. The nutrition value is generally similar to timothy hay, and as such it will be easy for your guinea pigs to digest.

As the name suggests, this type of hay is made from bermuda grass, which is commonly found in tropical and subtropical areas.

Alfalfa hay is often recommended for young guinea pigs, pregnant females, and guinea pigs recovering from negligence. It’s high in proteins and calcium, and as such it will be very beneficial for some guinea pigs in lack of nutrition.

This type of hay should be used with caution though, and perhaps only if recommended by vets and/or field experts.

We’ve never had any needs of alfalfa hay, and it isn’t available in local pet stores either. You can get it online from Amazon and other stores though.

Here’s why hay racks are bad

Lots of guinea pig parents use hay racks to keep their hay nice and tidy, but unfortunately most hay racks restrict their access to eating in a natural way.

Guinea pigs are grazing herbivores, and they spend a great deal of time eating whatever they can sniff up from their surroundings.

85-90% of their daily intake should be hay, and that’s why most people prefer to spread an even layer of hay across the bottom of their cage, or put in a tray that forms a nest for their guinea pigs to enter and munch on hay.

Hay should be offered in unlimited and unrestricted amounts, so your guinea pigs are encouraged to eat as much as possible.

If you restrict their access to hay, their teeth might overgrow and it can turn very bad in a matter of weeks. Their digestive system may start suffering from lack of fibers too, as they need a constant supply of fibers to keep their system moving.

How to store hay and keep it fresh for longer

Since hay is often sold and delivered to your doorstep in plastic bags and/or closed boxes, you may think this is the best way to store it in order to keep it fresh for longer periods of time.

However, that’s not the case, unfortunately.

Hay is usually stored and sold in plastic bags for hygienic reasons, but most bags do actually have small holes punched in the sides to keep the hay slightly ventilated. However, once you store the hay at home, it should be taken out of the plastic bag and transferred to a container with proper ventilation.

Here are a few tips on how to store your hay and keep it fresh for longer:

Hay needs to be stored properly, but it shouldn’t be kept for more than 6 months.

When hay isn’t stored properly, it will quickly turn bad. Especially if it’s stored in a damp place with changing temperatures, such as a basement or garage, it will quickly deteriorate. Once the hay gets exposed to moisture, mold may appear and you basically has to discard of your entire supply.

Mold is very dangerous for your guinea pigs, as it can cause critical illnesses.

If hay isn’t stored properly and mold has formed, it’s quite easy to see and smell what’s going on: hay gets a musty/moldy smell once it turned bad, and the color gets darker and it starts to disintegrate as well.

If your hay smells even the slightest off, you shouldn’t feed it to your guinea pigs.

Another sign of hay turning bad is the amount of dust forming on it. If it’s collected dust, it can cause respiratory problems, that eventually may need to be treated by a vet.