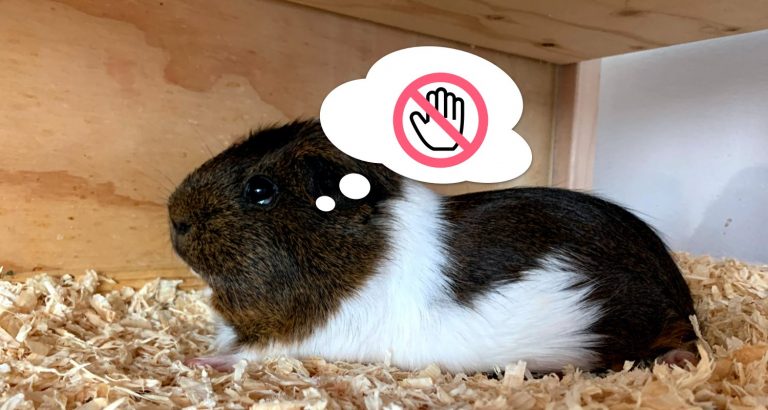 So you’ve finally got your new guinea pigs, and you’re in love.

However, you realize quite fast that they don’t like to be held. At all.

As frustrating as it may sound, most guinea pigs don’t actually like being held.

Some guinea pigs will put up with it, while others just hate it.

If you’re a frustrated owner of a guinea pig that doesn’t like to be held, you’ll have to examine why and how it is so.

Reason 1: You’re not holding it properly

If you’re not holding your guinea pig properly, it might hurt or scare it.

For instance, most guinea pigs don’t like the feeling of having their feet in the air, because it resembles the feeling of getting taken by a predator, so if you simply grab it and hold it without providing any support for their feet, they might not like it very much.

Small kids aren’t always big enough to hold a guinea pig properly either, and the guinea pig might try to escape if they feel too uncomfortable.

By doing so, your guinea pig will feel completely safe while being held. For adults, we recommend using this method as explained by Saskia from LA Guinea Pig Rescue.

Reason 2: Your guinea pig is hurting when being held

Some guinea pigs, especially Abyssinians, dislike being held because it hurts them.

The reason why it hurts them, is because their hair is curled into many different directions, and when you hold them, the hair is sometimes forced into wrong directions.

And due to their sensitive skin, the sensations they’re feeling can best be described as small needles being pressed against their skin.

Try loosening up your grip, and hold your guinea pig in a way so you’re not pressing against any cow licks or body parts where the hair is particularly curled in many directions.

Reason 3: Your guinea pig just doesn’t like being held

Some guinea pigs just don’t like being held, and that’s perfectly normal.

Although our boar is the one who’s generally most tolerant, he hates being held in our hands or arms.

He will constantly struggle to get away, and we have to make sure we’re holding him properly in case he suddenly wants to run off.

For most guinea pigs it’s the feeling of being held in your arms or hands, that they dislike. And others don’t like being held unless their feet are supported.

The easiest and safest way to hold a guinea pig, is by holding it against your upper body, with one arm underneath it and providing full support of its entire body, while the other hand is gently securing it and making sure it can’t run away.

Reason 4: Your guinea pig is sick

If your guinea pig is usually fine with being held, but all of a sudden starts disliking it, there’s a good reason to believe that it’s sick.

When a guinea pig is ill, it will usually try and hide it at first. You’ll notice that it isn’t as curious as normal, and it might not like being held like usual.

There could be tons of reasons for this, but in general a sick guinea pig doesn’t like the usual attention.

If you suspect that your guinea pig is suffering from an illness, it’s important to have it seen by a proper exotics vet.

Most of the time there are no visual signs that a guinea pig is sick, but the vet knows exactly how to examine it.