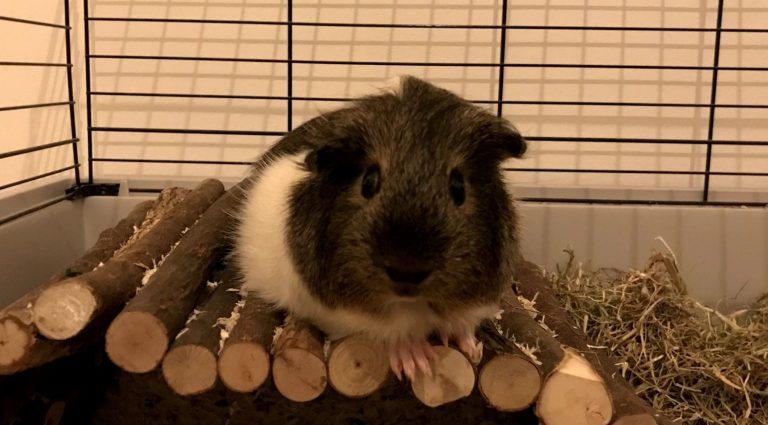 Guinea pigs are herd animals. That’s a fact. Unfortunately a lot of people don’t realise this, until they bring home a single pig from a local store and start researching their needs, behaviors, and habits, quickly realizing the need of a bigger cage with a friend added to it.

I’ve seen numerous discussions about guinea pigs and their needs of social interactions, unfortunately a lot of people seem oblivious to their needs, or they simply aren’t aware because the employee in their pet store told them their new furry friend is fine being alone.

So, for this article I’m going to explain some of the reasons why your guinea pig can’t be happy alone, and I’ll debunk some of the misconceptions that are widely spread on social media platforms, forums, and elsewhere.

Related: Signs That Your Guinea Pig Is Happy

Guinea pigs are social creatures, and they rely on each other in a herd to fulfill different roles. One’s always the boss, and guinea pigs actually have a very strict hierarchy where the most dominant one gets to decide the direction for the group. The other pigs are on different levels, but they’ll usually leave the rumble strutting and mounting to the strongest boar (male).

One thing worth noting is that, unlike dogs and other pets, guinea pigs do not consider their human as a part of their herd. They’ll love you for bringing them food, but they really need to live with at least one of their own kinds to stay happy.

This is the most important reason why guinea pigs can’t be happy alone: they need their daily interactions with their herd.

Another important reason, which has a bit of a connection to reason number one, is that guinea pigs are prey animals. They’ll run for cover if they hear a strange noise and/or see someone/something approach them quickly, and this reaction is amplified if the guinea pig is all by itself.

A few years ago I adopted a neutered boar from a local rescue shelter, and I was told he had to stay isolated for at least two weeks because they wanted to make sure he couldn’t get our sows (females) pregnant after introduction.

Our new boy was miserable both weeks, he didn’t come out at any time, he only ate when nobody were in the room with him.

However; after introducing him to his new cage friends, he lived up immediately and wasn’t as careful and skittish as when he was by himself.

When guinea pigs are in a herd, they’ll naturally feel more content with their surroundings, knowing that they’re not the only one keeping an eye out for predators. And for that reason alone, I would never recommend anyone to have just a single pig.

Guinea pigs are naturally curious, and I believe it’s a great sign of happiness, if they want to explore and approach you once you’re near their cage.

However, I do think guinea pigs feel more inclined towards being curious, if they have a friend. Usually what I’m seeing, is that one guinea pig approaches me, and then the more careful ones follow right after. It’s in their nature to simply “follow the leader”, and none of them wants to miss out on a snack or anything, really.

It’s really funny and entertaining to watch more than one guinea pig run around and explore their surroundings, because if they’re in a new environment, a playpen for example, one will usually take the lead and a line of “train cars” starts forming once the guinea pig in the front starts walking.

“My Guinea Pig Is Happy Being Alone” – Debunking the Misconceptions

We know guinea pigs can show signs of happiness even though they’re alone, but how do we know that they’re consistently happy with their life?

I’ve come across a lot of misconceptions, that I believe exist because people are sharing outdated advice about guinea pigs. They do so with the best intentions, but unfortunately the guinea pigs may end up suffering from loneliness, which can cause a ton of related conditions, such as lack of appetite, losing weight, and more.

Below are some of the claims I keep seeing, and I think it’s important to talk about them in order to gain an understanding of why it’s wrong.

“My guinea pig is popcorning although he’s alone”

The popcorning is often related to happiness, which is somewhat true. Lone pigs can be happy momentarily, but we don’t really know for sure if they’re truly and permanently happy. It does go against their nature though, which leads me to believe they aren’t actually happy and content being alone.

Popcorning is often seen as a sign of excitement, ours usually do it whenever we rustle a bag, followed by high pitched wheeking.

“My guinea pig talks to me when I hold it”

Guinea pigs don’t usually talk, unless they’re feeling bothered or overly excited. Lots of guinea pigs whimper when they’re being held and touched, and it’s easy to think that they’re just “talking” about their day and chatting. However, these sounds are actually calls of distress and annoyance, caused by your hand holding or touchings it.

Your pig doesn’t have to be in pain to express these sounds, most of the times they’re just doing so because they don’t like whatever you’re doing, and they basically want you to leave them.

“My guinea pig is healthy, so it must be happy”

This is actually something I get a lot: “my guinea pig was seen by a vet, who claimed it was perfectly healthy”.

While that could be true, there’s a bit more to it than what the vet says: vets can either be very knowledgeable about guinea pigs, or not. Imagine treating all kinds of animals that are all different from each other, it’s simply impossible to know everything about any animal. Some exotic veterinarians are very knowledgeable though, but unfortunately a lot of vets are either oblivious with the wellbeing of guinea pigs, or base their assessments on outdated information. It’s not that they’re bad vets, but they simply can’t know it all at once.

Guinea pigs are also very good at hiding any illnesses as well as other conditions, and they’ll usually not show any signs of deterioration until it’s too late.

“My guinea pig doesn’t get along with others”

In some cases this is true, but I believe there’s also a good amount of human errors happening if a guinea pig isn’t able to bond with anyone.

Some guinea pigs can be very dominant though, and as such they are very difficult to bond with others. However, a proper introduction AND large habitat are absolutely crucial factors for a happy and healthy bond between your pigs.

For some guinea pigs, maybe 5%, they might just be too difficult to pair with others, because of their ill temper and dominant behavior, which especially with boys can lead to bad fights.

These Are the Only Reasons to Keep Single Guinea Pigs

There could be rare occasions where guinea pigs are better off alone. In those cases they’ll definitely benefit from being able to see and hear another guinea pig nearby.

So here’s what you can do:

Put your guinea pigs in cages next to each other.
Some cages even come with a divider, enabling it to be split in two. That way your guinea pigs can be alone and together at the same time, and they’ll be able to have some natural interactions while still being safe and sound.

BOARS AND SOWS must be kept at a distance from each other though, otherwise the sow may get pregnant through the bars. It sounds ridiculous, but there are actually stories about this. Make sure you keep their cages at least a few inches apart, so they can’t have any direct contact with each other.