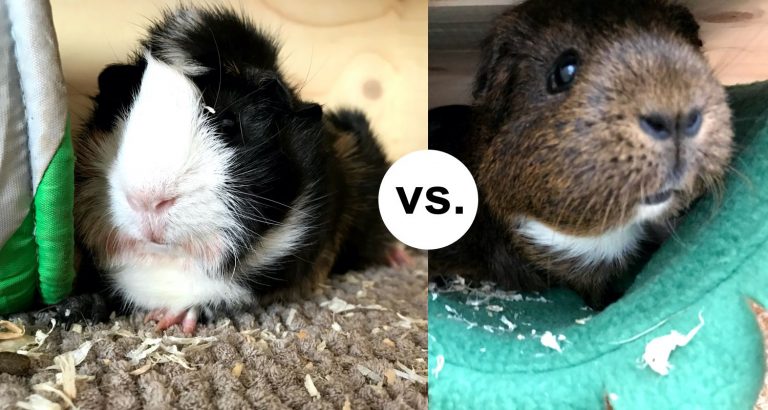 If you’re in the process of getting guinea pigs, you’re probably contemplating on whether you should get males or females.

The male vs. female discussion is an important one, because although guinea pigs are seemingly simple creatures, they do have special needs that differ from males to females.

In this article we’ll discuss the most important differences between boars (males) and sows (females), and give you a better understanding of their needs.

Is there such a thing as a ‘better gender’ among guinea pigs?

When it comes to guinea pigs, the gender discussion is a heated one. There are lots of different opinions on whether the boars or the sows make better pets, but we love them all.

Some people love having boars, others love having sows, and others have a mixed herd with a neutered boar and several sows living together.

We’ve had both males and females, and we’ve loved every single one of them for their different quirky personalities, fun activities, and loving attitudes.

Male and female guinea pigs are quite similar looking, but when you take a closer look you’ll notice a few differences.

One of the major differences being their genitals, of course.

Boars’ genital areas tend to bulge outwards and have distinct scrotal pouches that will develop as the boar matures. They also have smaller nipples.

In general, boars tend to get bigger than sows.

However, males and females of different breeds can differ greatly in size.

This is where you’ll see the biggest differences, but it takes a trained eye to notice the differences in personality between males and females.

In general, boars are usually more calm than sows. They don’t go in heat every second or third week, and if they’re in a harmonic herd they don’t usually show any signs of aggression towards one another, with the exception of occasional squabbles over dominance.

Females can be quite ill tempered from time to time, especially when they’re in heat they can get quite moody.

If you have a female pair, you might think these squabbles are a bad sign, but it’s usually just females being females, and after a few days they’ll calm down once again.

All guinea pigs have dominant behavior, but it’s usually more distinctive with males. In nature, guinea pigs live in herds with one alpha male and a group of females. The alpha male has to stay on top of his game, and to do so he has to keep asserting his dominance. From time to time youngsters might want to put him in place, and he’ll have to respond to these challenges by going through the whole rumble strutting/mounting scenario.

If you have a pair of male guinea pigs, it’s normal to see them assert their dominance once in a while, but it’s usually quickly over unless they’re both equally dominant males.

If you have a pair of females, on the other hand, you’ll probably not see as much dominant behavior. Usually the females get along just fine with very little arguing.

Boars are usually more active than sows, as they love to explore new things and look for food.

We haven’t seen much of a difference with our guinea pigs though, but in general we do note that males tend to always go first when new things have to be explored.

With a pair of guinea pigs you’ll often notice that whenever one guinea pig starts eating, the other one follows along. This is typical behavior, and an important indicator of a harmonic group of pigs.

While male guinea pigs tend to talk more, females can get quite vocal as well.

From what we’ve observed, the boars are usually the most talkative in general.

However, females can get quite vocal when they’re in heat or have conflicts over something.

In general guinea pigs are not loud pets, but they do squeak from time to time.

By nature, the boars are messier than sows. They mess up their living space faster than females do, which is probably caused by their curiosity and eagerness to explore the area.

Whereas females tend to keep themselves clean with no help, males need a helping hand once in a while.

Due to the anatomy of boars’ genital areas, they tend to accumulate dirt, shavings, hair, hay, and other stuff there. So an occasional bum bath and wiping of their genital area is a must.

One thing that tends to surprise most new guinea pig parents, is how smelly these small furballs can get.

As we’ve already stated, males tend to be a bit messier, and they’re more likely to develop an unpleasant smell than females are.

All guinea pigs can get smelly if their cage isn’t properly cleaned though, and we haven’t actually noticed any significant differences in the smell of males and females.

It is likely though that an all-male herd would smell a bit more due to their messy and dominant nature, as they’ll spend more time marking their territory using their grease glands.

Guinea pigs have a lifespan between 4 and 8 years, but some breeds tend to live longer than others.

Boars are generally said to have a longer lifespan than sows, but their overall health plays a big role and you can’t always count on this.

Guinea pigs do actually need quite a large cage to be happy and healthy, and all plastic cages sold in pet stores are generally way too small.

With females being less dominant and more tolerant towards one another, they don’t always need as much space as males do.

Males do need a bigger space because of their dominant nature though, but if they’re getting along fine they’ll most likely do well in a cage of a similar size than what is recommended to females.