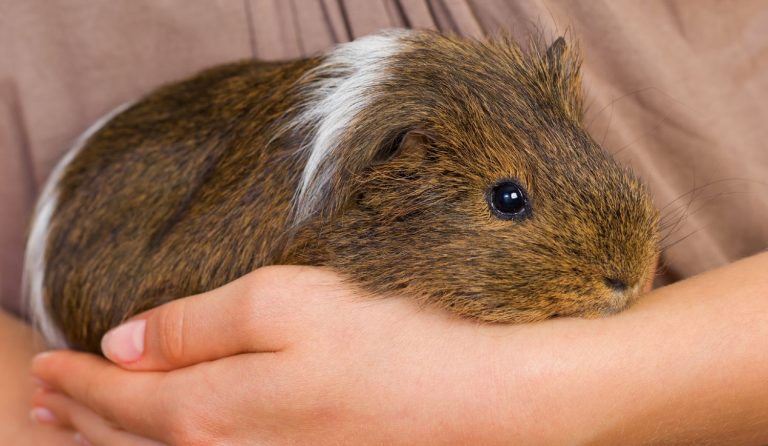 It is our experience, that guinea pigs have an average life span between 4 to 8 years, with some species living a little longer than other.

Longevity is not always guaranteed by an overall healthy life, but it’s an important criteria though. Most guinea pigs “complete” their lifespan in just a few years, and afterwards they’re considered seniors that are going about their daily life and taking care of their herd.

In this article we’re explaining the different life stages a guinea pig passes through, and what it means for their behavior, habits, and needs.

0 to 3 weeks: Staying with mom

Guinea pig pups stay near their mom most of the time, but they do also zoom around their cage a lot when playing.

In this stage they’re little furry potatoes, but they’re quickly gaining weight. They might seem a bit skinny at first, but most guinea pigs gain weight later on.

At the age of 3 weeks, males must be separated from their mom and other female pups. Otherwise they’ll start reproducing. Females can stay with their mom for another week, but they’re usually weaned between the ages of 3 to 4 weeks, meaning they’re perfect able to be on their own afterwards.

1 to 3 months: Puberty kicks in

Young guinea pigs are quickly transforming into adults, and in just a few months they need to figure out a hierarchy and squabbling is a common sight if they’re kept in a group.

Guinea pigs between the age of 1 to 3 months are fully capable of reproducing, and they’ll slowly start figuring out where they belong in a group.

Although still being quite energetic and playful, this is definitely their most exciting stage in life.

While still growing, guinea pigs are generally considered adults when they’re 4 months old. Female guinea pigs are not recommended to reproduce until the age of 5 to 6 month though.

Most guinea pigs are still quite energetic during this stage, but most of them start showing signs of settling in with their herd, and the squabbling and dominance behavior is expected to slowly reduce moving forward.

Between the age of 7 to 14 months, your guinea pigs are still growing. Most people are actually surprised by this, because they may have adopted what they thought were adult guinea pigs, but they keep growing for several months beyond the age of adulthood.

When guinea pigs reach the 14 month-mark, they’ll usually be a little more chubby and have a nice, big, fluffy fur coat.

15 to — months: The joys of seniorhood

From the age of 15 months, your guinea pigs are considered “seniors” – but most of them aren’t really old yet, they’re just fully grown and slowly starting to calm down a bit.

While fights and conflicts are completely normal occurrences in any herd, you may start seeing fewer and shorter fights as they grow older.

A common sign of aging is altered sleeping habits, usually your guinea pigs will sleep more than they used to, and lack of appetite is commonly seen when guinea pigs are very old.