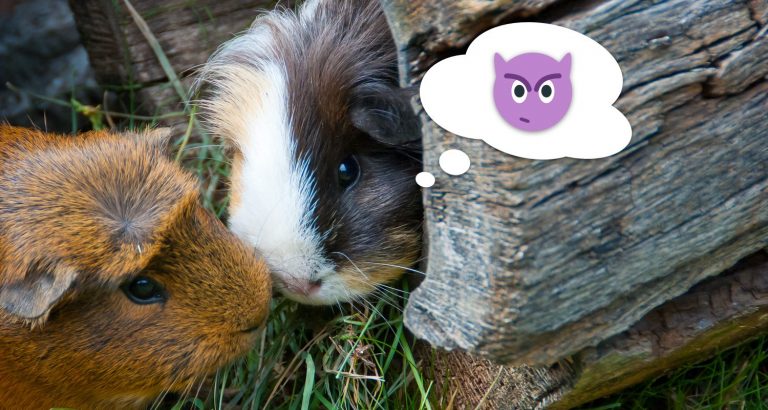 Guinea pigs have their own peculiar ways of saying “enough is enough”, and for a human these warning signs aren’t always easy to decipher.

For this article we’ll walk you through some of the most common warning signs, and what they usually mean.

Example (opens in a new window)

Why does it occur: This sound is often accompanied by a vibrating body, and it usually occurs when you’re stroking it from the head towards the back/bottom.

Guinea pigs, especially boars, don’t like being touched on their backs or bottoms because they take it as a sign of being dominated, as guinea pigs will usually mount each other to assert domination.

Example (opens in a new window)

How to prevent it: It’s not always easy to understand why guinea pigs are chattering their teeth, but if you’re holding it, try putting it back into its cage. Usually the teeth will stop right away.

Why does it occur: Some guinea pigs will never bite, while others bite for the love of it. If your guinea pig is just carefully nibbling at your finger or clothes, it’s probably just checking to see if it’s food. However, if it bites hard, it’s most likely feeling bothered or in distress. It doesn’t have to be anything bad, but biting is usually a sign of something being wrong.

If your guinea pig doesn’t usually bite and it suddenly starts biting you when you pick it up, there’s a good reason to believe it’s sick. Any changes in behavior should always be taken seriously and a vet should see it as soon as possible.

How to prevent it: The easiest way to keep your guinea pig from biting you, is to take note of what situations that cause it to bite. Is it because of the way you’re holding it? Does your finger taste like veggies?

Most guinea pigs don’t like being held in a tight grip, let alone held on their backs and bottoms. So try to apply less pressure and perhaps allow them to snuggle inside a sleeping bag while you’re having them outside of their cage. It might make them feel safer, and therefore they’ll stop biting.

Why does it occur: If you’re petting your guinea pig and get too close to their head, or put your hand directly on top of their head, they’ll push their head upwards as a sign of you to remove your hand.

Guinea pigs don’t like having their eyes covered, so if you stroke them from the top of their head and backwards, they’ll probably dislike it.

How to prevent it: This is the easiest one to get out of, simply by not covering your guinea pig’s eyes with your hand. If you keep their heads free and pet them behind their ears or beneath their chin, they’ll have no reason to push their head upwards.

Understand your pig and make it happy

There’s really no other way to gain an understanding for your guinea pigs, than to observe them carefully and take note of their behavior.

Although we’ve had guinea pigs for decades altogether, we’re still learning and so are professionals that are studying these furry potatoes for a living.

Their warning signs are just the tip of the iceberg, but certainly the most important signs to get familiar with.

Once you’ve learned to understand their warning signs, you’ll most likely see a more relaxed guinea pig that loves cuddle times even more than usual.

Make sure your guinea pigs are comfortable, and you’ll no longer have to worry about warning signals.