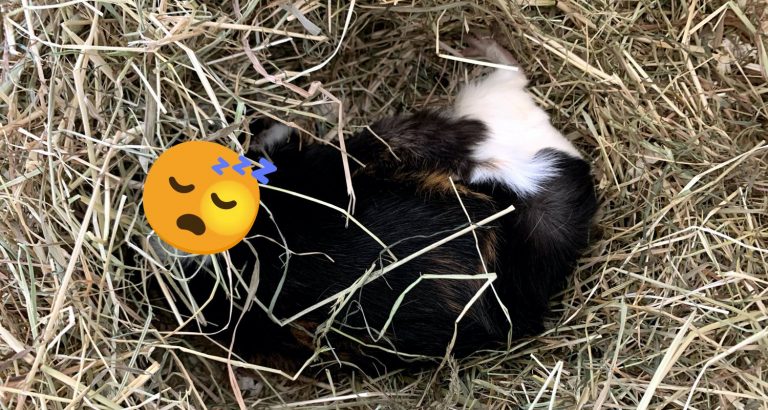 Guinea pigs are crepuscular animals, meaning they’re most active during dawn and dusk, where it’s harder for predators to see them.

You might be wondering whether your cavies are sleeping at all, and how much they’re actually sleeping.

In this article we’ll have a closer look at your guinea pig’s sleeping habits, and talk about their needs of peace and silence.

With an average guinea pig sleeping approximately 4 hours per day, it’s no wonder why you’re only rarely seeing it sleep – if ever.

Guinea pigs are masters of power napping though, and you’ll likely see them relaxing for 10-15 minutes at a time, and at night they’re generally more relaxed than usual.

Instincts of a prey animal

The reason why guinea pigs don’t sleep much, is found in their prey animal nature.

Guinea pigs have to be on constant alert for predators, which is why they can sleep with their eyes open and take short power naps of 5-10 minutes rather than long naps.

Although your guinea pigs don’t sleep much, they still need proper sleeping arrangements.

They need a place where they can feel safe and at ease, in order to relax and unwind when needed.

If you don’t give your guinea pigs a proper area to relax and sleep, they might start showing symptoms of stress and unhappiness such as aggression towards other guinea pigs, less activity during the day, and more.

Guinea pigs generally like to relax in corners and other areas of their cage, where nothing can sneak up on them from behind.

For that purpose, they’d love to have a house as well as multiple shaded areas where they can retreat to and get their much needed sleep and relaxation.

If you notice your guinea pigs relaxing during the day, they usually keep their eyes open while lying down, curled up in what seems like a sleeping position.

This is actually your guinea pigs sleeping.

One way to see if your guinea pigs are sleeping, is if they get startled once you  approach their cage. Often they’ll look like they’re just lying down, but they are in fact sleeping if they are startled by your sudden movements or sounds.

Of course, some guinea pigs do sleep with their eyes closed, and it is said that they’re doing so if they feel completely comfortable and safe in their environment. However, even guinea pigs that feel very safe, won’t always close their eyes when sleeping.