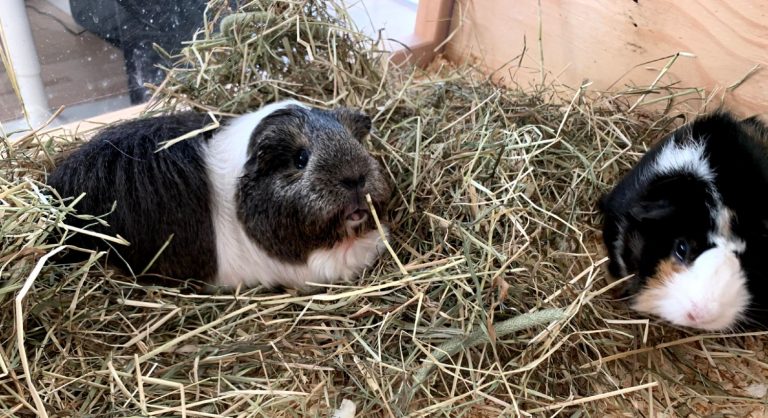 Hay racks are popular because they prevent your guinea pigs from scattering the hay all over the cage, and they won’t be able to pee and poop on it either.

You may be thinking that hay racks will help you cut back on how much hay you’re using, but this may actually end up doing more harm than good.

Below we’ll walk you through the reasons why hay racks are bad and potentially dangerous, and we’ll look at some great alternatives to keep the hay well organized and pigs happy.

Why are hay racks bad for your guinea pigs?

There are tons of horror stories online of guinea pigs getting stuck in their hay racks or hay balls, getting injured in an attempt to reach the hay inside the hay rack, but that’s not all.

Hay racks and hay balls may look like a nice and fun way to store their hay, but in reality they restrict their access to hay – which in the end could cause overgrown teeth, gastrointestinal problems, and more.

If you’re not yet fully convinced, here are a few horror stories from guinea pig owners using hay racks:

Guinea pigs spend their time foraging and grazing out in the wild, which is why you’ll often see them sniffing around inside their enclosure.

Now, imagine you’re eating a burger, but the burger came wrapped in a wire mesh sheet. It would be a struggle to eat the entire burger through that, right?

It’s the same principle with hay racks and hay balls. They may look neat, but they’re restricting the ease of access to fresh hay, and you’ll end up with guinea pigs not getting their much needed daily ration of hay because of that.

If you want to keep your guinea pig’s cage neat and organized, there are multiple ways of doing so while keeping it safe and secure.

Just make sure the hay is always easily accessible all the time. Preferable, your guinea pigs should be able to burrow into the hay while eating.

A cat litter tray is a great way to make a safe enclosure that your guinea pigs can enter and munch hay in.

Most people put wood shavings at the bottom to absorb any liquids, and then add a layer of fresh hay on top of it.

This is a great way of keeping things organized, while at the same time granting your guinea pigs the opportunity to forage and graze like they do out in the wild.

2. Any house can double as a hay rack

Guinea pigs love relaxing and sleeping inside a pile of hay, and if you want to keep it organized, you can stuff one or two houses with hay.

That way your guinea pigs have easy access to the hay, and with a little maintenance it will usually stay inside the house.

Just fluff it up once in a while, to prevent your guinea pigs from pressing it together at the bottom.

A lot of guinea pig owners made their own hay racks out of cotton bags, by simply cutting one or two openings at the bottom and hanging it on the side of the cage.

Your guinea pigs might want to hide inside the cotton bag, but as long as you’ve made the openings big enough for them to do so in a safe way, it’s totally fine.

Same goes for cardboard boxes, and they can usually be purchased from a local hardware store in any size you want.

Cut a few holes in it, fill it up with hay, and your guinea pigs will have a nice, safe alternative to a hay rack.