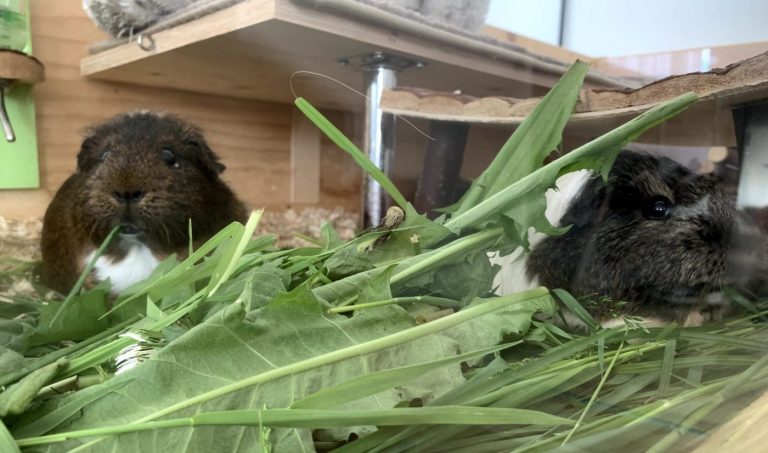 Guinea pigs are fun and bubbly little fur balls, and you can easily be entertained for hours by watching their interactions, activities, and regular daily life.

In contrary to bunnies and other pets, guinea pigs have an extensive vocabulary that’s generally expressed by sounds and – in some cases – combines with certain movements.

If you’re often finding yourself wondering what this exact sound means, here’s a comprehensive guide that deciphers the most common guinea pig sounds.

Understanding the context (and why it’s important): Some sounds are similar to each other, and in those cases it’s important to understand what context they’re made in. So whenever you’re trying to understand a specific sound that your guinea pig just made, it’s a great idea to take the whole surrounding situation into consideration. If one sound has multiple meanings, we’ll describe them in this guide.

This is the sound of an excited guinea pig. Usually this sound is made in anticipation about being fed, and usually sounds like a loud whistle/squeal. Guinea pigs associate specific sounds with food, it could be a fridge opening or a bag being rustled near their cage.

Wheeking can also be heard if a guinea pig is calling for attention.

Similar to a loud scream, a shriek is a signal of alarm or pain. This is often heard when a submissive guinea pig is being nose butt or nudged by a dominant guinea pig, and normally you’ll hear just one shriek at a time.

Some guinea pigs are more vocal than others, and are more likely to shriek for whatever reason that upsets them and/or frighten them.

Related: Signs That Your Guinea Pig Is Happy

Guinea pigs are often whining/moaning, if they feel annoyed by something (or someone). It’s usually heard as a constant sound, that goes on until the action that annoys them is stopped. This is easily mistaken as happy sounds and/or chatting, and context is important to understand if your guinea pig is annoyed or simply chatting.

A guinea pig is likely to whine/moan in these situations:

Chatting is often heard as low pitched tones, and you’re most likely to hear it when your guinea pigs are feeling comfortable while exploring new surroundings and being active.

The sound is easily mistaken by whining/moaning, but the difference is usually found in their physical appearance while doing so.

When guinea pigs are chatting, they’re usually exploring or being active, but if they’re whining/moaning they’re often in a standstill/frozen position.

Sometimes a female will chatter in order to comfort young ones as well.

Some people compare this to a cat purring, but it isn’t quite the same. Purring usually occurs when you’re petting the guinea pig from its head towards the back, and they’ll usually start purring when your hand reaches their back. Most guinea pigs don’t like being touched at their backs, and the purring sound is a sign of discomfort. If you keep doing it, your guinea pig will either run away or perhaps start teeth chattering, which in this case serves as a warning signal that it can/will bite you if you don’t stop.

Guinea pigs can also purr at each other to assert dominance, and in such cases it is usually accompanied by rumble strutting.

Chirping is a rare sound, and some guinea pig parents may never hear it, while others hear it every day.

There are multiple different theories as to why guinea pigs are chirping, and most of these theories describe the following:

This is not a pleasant sound, and guinea pigs hiss at each other as a final warning before attacking. It’s a sign of aggression, that usually makes nearby guinea pigs to back off a little.

It’s not a normal sound for happy/comfortable guinea pigs to make, and it usually occurs during introductions and/or if one guinea pig bumps into another one by accident.

Teeth chattering or teeth grinding is a very distinct sound, that may occur for multiple reasons. In general it’s a sign of irritation, but also aggression, and usually the teeth chattering gets louder the more annoyed your guinea pig feels.

Below are some explanations of what teeth chattering usually means:

Unless teeth chattering occurs during feeding, it’s important to keep an eye on your guinea pigs to make sure they don’t fight.

You may also be able to tell how annoyed your guinea pigs are, by how loud they’re teeth chattering. The louder it is, the more annoyed they are.

If your guinea pig hoots, it could either be a sign of a heart problem or an URI (Upper Respiratory Infection).

Usually it’s a low wheezing sound, and if it persists over a longer period of time you have to call a vet and have your guinea pig diagnosed.

On the other side, hooting can also be heard from time to time if your guinea pig manages to get something stuck in its throat, and in such cases they’ll usually resolve it themselves by a sneeze.

If you’re in doubt, it’s better to have your guinea pig checked by a vet, instead of waiting.

Guinea pigs can sometimes cough or sneeze if they manage to get food stuck in their throats, and usually a single cough is enough to resolve the issue. It may sound unpleasant, but as a guinea pig parent I hear it once in a while and never experienced any complications.

However, if it seems to cough or sneeze for no reason and at multiple times throughout the day, there may be reason for concern.

If you’re in doubt, call a vet and get your guinea pig checked. They may be suffering from an infection, but old hay could also be the sinner because it contains a lot of dust.

Squeaking is a high pitched sound, which is best translated to “ouch!”. You may hear this sound if you trim their nails and get too close to the blood vessel (also known as the “quick”), or if you pull their hair by accident.