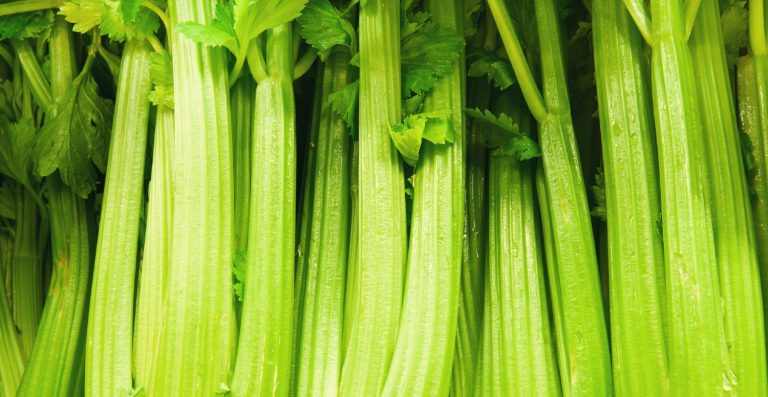 Can guinea pigs eat celery? Yes, they can eat the leaves, the stalks, and they can also eat the celeriac (root) which has a similar taste. However, they should do so in moderation because celery is high in oxalates.

If you would like to know more about feeding celery to your guinea pigs, this is the guide for you.

Most people either have a love- or hate relationship with celery. It’s basically the same thing with guinea pigs. From what we’ve seen, some guinea pigs enjoy celery while others prefer to nibble on the leaves without actually eating much of it.

The reason why celery is recommended to serve only once or twice a week, is because they’re high in oxalates (also known as oxalic acid). The problem with oxalates is that they bind to calcium and reduce its absorption, which could potentially cause bladder stones – a painful condition that requires medical treatment.

Another thing worth noting, is that celery has actually made it to the Dirty Dozen list, meaning that it’s among the crops featuring the highest amounts of pesticide residue. For that particular reason we recommend that you always buy celery organic whenever possible.

Guinea pigs are unable to manufacture their own vitamin C, which is why they need to get their required daily amount through fresh produce and pellets.

Celery does contain some vitamin C, which is great, and it’s also within the ideal ratio of calcium and phosphorus. Other vitamins are contained within celery too, such as vitamin B-complex as well as A, D, E, and K.

Therefore we believe that celery represents a healthy snack that you can serve once or twice every week, but only in smaller portions due to the amount of oxalic acids.

How to select the best celery for guinea pigs?

We recommend going for the celery stalks of a light green color, as they’re usually more crunchy and less stringy than the ones with a darker tint.
Fresh celery stalks have a stiff, crispy texture, and they should not bend. If they bend easily or feel soft to the touch, they’re not fresh and your guinea pigs would much likely not enjoy them as much as completely fresh celery stalks.
If you’re opting for the less popular celeriac (root), it should be somewhat clean with no mushy areas and an overall firm texture.

How to feed celery?

Feeding celery is incredibly easy. Simply cut a stalk into small 1-2 inch pieces, and keep the leaves on as well. For the celeriac (root) we recommend cutting it into small 1×1 inch squares and serving one per guinea pig.
We recommend serving celery once or twice a week, and in moderation due to the amount of oxalates.

Is celery good for guinea pigs?

While celery contains many nutrients that are beneficial for guinea pigs, they also contain high amounts of oxalates.
Unfortunately guinea pigs are prone to bladder issues, so a balanced diet is very important to keep them healthy.
That means vegetables with a high amount of oxalates should be fed in moderation, even if they contain lots of other beneficial nutrients.

Leaves, stalks, and roots – are they safe to eat?

Yes, you can serve all parts of the celery to your guinea pigs. Celeriac, being closely related to celery, is safe as well. The leaves are probably the biggest favorite among cavies, but they’re also the hardest to get because they are usually removed when being packaged for the grocery stores.

When you cook celery, it loses the taste and texture becomes soft. Guinea pigs should only have raw fruits and vegetables, as cooked foods will upset their digestive system and cause severe health related problems.

When celery is frozen, the texture changes and the stalks become softer once thawed.
We haven’t found any proper evidence showing that they can or cannot eat celery that has been frozen, but we wouldn’t risk it. And knowing that a lot of store bought frozen produce has been blanched prior to freezing, which causes an even greater loss of nutrients, we simply wouldn’t risk it.

We’re not familiar with any examples of dried celery being served to guinea pigs, but we wouldn’t recommend doing so. Drying any fruit or vegetable won’t just alter the texture, but also increase the concentration of other nutrients such as sugars due to the water evaporating.

As part of our editorial process we use high-quality sources only, and strive to keep our content accurate and trustworthy by constantly keeping up to date with the latest knowledge.